All pupils will gain a comprehensive understanding of the world and their place in it. Through a broad and knowledge-rich History, Geography, and Religious Education curriculum, each pupil will develop their ability to communicate effectively, collaborate with their peers, and think critically. By studying how the world works, the actions of humans before them, and the current beliefs of humans, our pupils will be exceptionally-equipped with the knowledge and skills necessary to flourish in their futures.

In Humanities, we have made the decision that all of the subject content we teach during Key Stage 3 is vitally important for our pupils’ development, as well as their ability to access the GCSE content in History and Geography. Due to the reduced amount of time pupils have had in schools during the 2019/20 academic year, the following changes have been made to the curriculum for the 2020/21 academic year:

If needed, some of the Y8 content will be taught in Y9.

Condensing the Y9 content does not mean watering it down. Our Y9 pupils will need to work hard and this will be a very important year for them).

Pupils at Key Stage 3 are taught a vast expanse of topics that provide both a knowledge-rich curriculum and a strong foundation on which to study the subjects at GCSE level.

Introduction to the History

Glacial Landscapes of the UK

The Geography of Crime

Pupils are assessed formally twice per year. All assessments model GCSE style questions and pupils will receive a percentage after each assessment. Assessments can contain questions on any of the previous topics from KS3 which means pupils have to be able to recall content from the whole year.

After a comprehensive Key Stage 3 programme, pupils will be given the option of studying either History or Geography at GCSE level. The content and form of the examinations can be seen below.

The Landscape of the UK 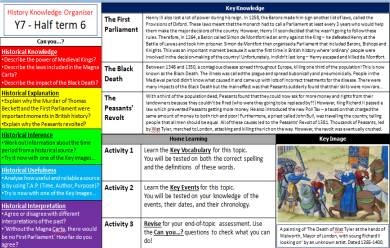 Home Learning in Humanities consists of utilising the topic-based knowledge organisers to compete activities that augment the classroom learning. These activities involve learning the spelling and definitions of key terminology, practising key subject-specific skills, and revising the knowledge for end-of-topic tests.

How can you help?