It is imperative that pupils conduct themselves from the moment they put their Astrea academy Sheffield uniform on in the morning to when they return home. This includes movement around the academy building between lessons and unstructured times. Here at Astrea, we have adopted a silent and talking zones. These are identifiable by red and green spots. These spots are easily visible to ensure all pupils are aware.

Outstanding behaviour is the first step to learning. Disruption impacts on and diverts pupil and teacher focus from the purpose of a lesson. We are relentless in our approach that all pupils progress in every single lesson, every single day. Our ‘Disrupting Learning’ (below) in class system reduces low level disruption and supports pupils to learn self-discipline to manage their own behaviour, actions and choices.

Positive Astras and negatives are issued to pupils for other behaviours around the academy.

Sanctions for incorrect behaviour and choices

Pupils will be issued detentions if they reach the following thresholds:

Regular meetings with pastoral and senior leaders will review pupils who persistently disrupt and achieve a large proportion on negatives. Pupils may be issued sanctions for negative behaviour over time.

Detentions will take place on the following days:

Detentions are usually issued the following day for incidents or poor choices by a pupil. The detention must be completed on the designated day. Detentions will not be moved for personal arrangements made by the pupil or their parent or carer. Unsuccessful completion of a detention will result in the pupil failing that detention and the next level of detention (as shown in the poor choices flow chart below) being issued. For example, if a pupil does not meet the standards of behaviour in a 30-minute detention then the next sanction would be a 1-hour detention. Should a pupil receive a detention, a text will be sent to parent or carer the evening before the detention. 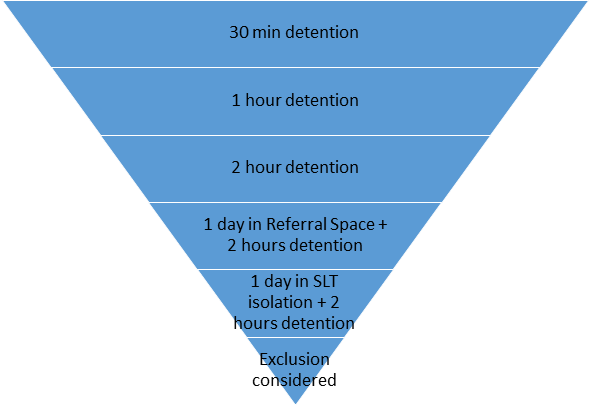 Whilst in detention, pupils are to read, study materials they have taken to the detention themselves or complete the work that is set. Failure to do any of these or follow the detention rules will mean that the pupil will fail detention. They will therefore return when the next detention takes place to serve the next sanction on the tiered system. If a pupil fails 2 detentions for any reason, the sanction will be escalated, and the pupil will be referred to the Referral Space (RS) for 1 day which will finish at 17:40.

Class Charts is currently not used in Prep or Pre-Prep due to the age of the pupil learning and the need for a more visible behaviour system. Here, a highly visible traffic light system is used to encourage and support positive behaviour, but also to discourage any negative behaviour. The system is designed to be open and transparent, but the teacher needs to be clear in their words and actions with every pupil. For a pupil to meet expectations it must be made clear where they are getting it right and what it is that they need to change.

All pupils begin the school day on the green traffic light and the aim is to raise above this into the ‘stars’ by showing excellent behaviour, work ethic or other excellent personal actions, particularly demonstrating one, some or all of the 7 core values (e.g. supporting a friend who needs help). If this happens, the pupil will move into the stars. If a pupil is able to move into the stars 3 times during the week, they receive a small prize. This encourages pupils to work towards the stars at all times during the week, even if they do not reach it for one day.

If a pupil displays undesirable behaviour, e.g. shouting out in class or being unkind to others, they will receive a verbal warning in the first instance. If this continues, they will move into the amber section of the traffic light as a visual reminder of their actions. The aim is to catch the pupil now showing a positive behaviour so they can move back into the green as quickly as possible. If the undesirable behaviour continues, then the pupil will move into the red. If this happens, the pupil’s parents will be spoken to at the end of the day about their behaviour. Again, as with the amber, the aim is for the pupil to move back up to green as quickly as possible by showing positive behaviours.

It is made clear to pupil that serious breaches of behaviour such as those detailed in the table below, will result in immediate movement to red and a parent meeting conducted (this could be an immediate phone call depending on the severity of the incident).

Where a pupil persistently disrupts learning or repeats behaviours which make others feel unhappy or unsafe, a cumulative response will be used. In order to encourage any pupil to not repeat these unwanted behaviours, the academy has a stepped response to poor behaviour. Running sided by side, these cumulative responses, interventions and support will be continuously reviewed and agreed with parents and the Inclusion team.

There are no upcoming events.